[Update:  What follows is the details of the survey and then final summery at the end.  I'm adding some of summary results here for those who simply skim.

In New Zealand 38% of the workers had worked 100hrs a week during their heavy crunch time.Keep in mind a regular work week for most countries is 40 hours. At 100 hours that's 2-1/2 times the number of hours per week as a regular person has to put in. That's over 14 hrs a day even if you work 7 day weeks. Equivalent to 20 hrs day if it were a 5 day work week. Also keep in mind most countries and fair trade organizations have a cap of 60hrs a week total.  Anyone putting in 100hrs in a week has exceeded the limit in most countries by a full weeks worth of labor on top of the maximum.This also wasn't simply for 1 week for most of those working. In New Zealand 13% of the workers put in long weeks for over 10 weeks. 19% put in 8 weeks of heavy overtime. 10 weeks is 2-1/2 months or likely 70+ days non-stop without a day off.
While New Zealand was the highest, most countries far exceed regular labor limits. Details in the survey and end summary.

I posted this survey in the hopes of getting a sense for any consensus on some of the various issues visual effects professionals have to deal with. What are the priorities of vfx professionals? We talk about hours and other problems but how much of an issue are they? Do they vary by location?

This data will be submitted and used by the VES Strategic Committee and I'm making it available here for reference.

Basics
In the end 663 people from around the world filled out the survey.
31 countries were represented.

Number of surveys done in the following countries:

The other countries had less than 5 people each.
China had 3 people report and I have included that in some of the following charts just to have a data point.
27 people did not provide location information so won't be used for the location info section.

Caution
663 people responding to the survey isn't bad but with thousands of people in the industry (unknown exactly how many are in any one region, let alone the world), the sample is only a rough sample and can only represent those that took the survey. The small number of sampling in some countries can greatly skew the results so don't extrapolate these into representing a majority of cases.

I've tried to double check the calculations but if you see something amiss go ahead and flag it.

Results
The next several charts are what the survey web site provided. After the charts are corresponding tables of the actual values. Note the values are averages. These are for all the survey results (global).

I ran numbers in Excel to get Median values, which I think are much more useful, as well as breakdown by country. These are posted at the end.

The first two questions have values of 1 to 5 in terms of no importance to highest for each topic.
Priority of 5 meant that it was a requirement or a big concern.
Company meets needs, a 5 indicated the company was doing very well at meeting the needs.

It was interesting that every topic received some 5's and some 1's, so something that was critical to some people was of very little concern to others. And that's why the averages shown in the first batch of data points is not as interesting as the median values that are listed later. 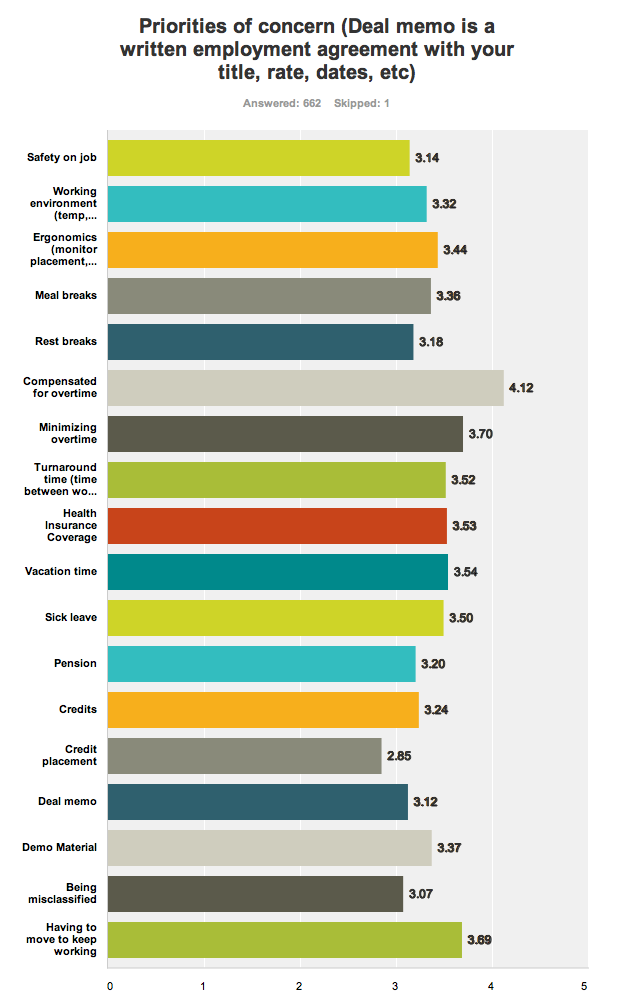 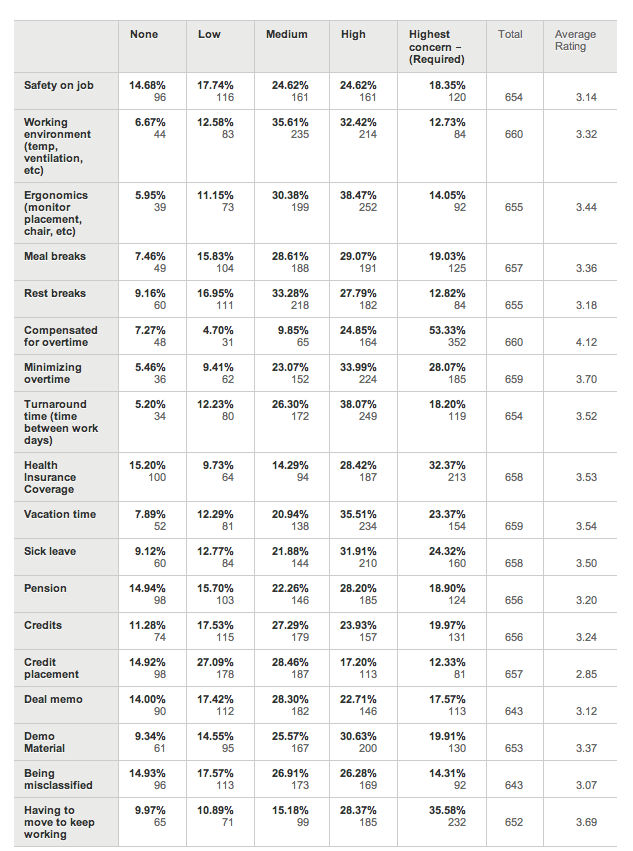 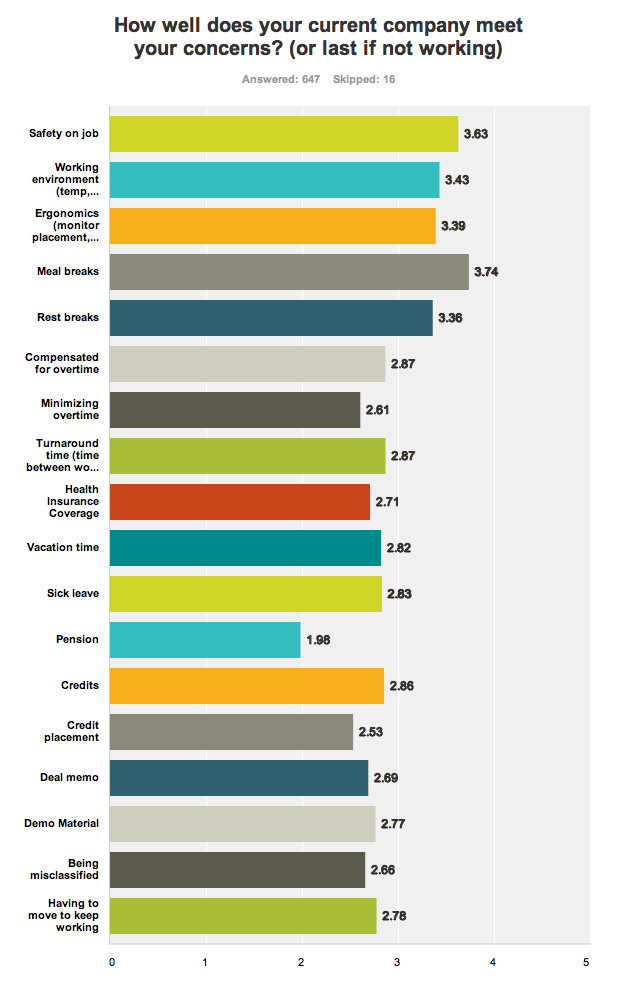 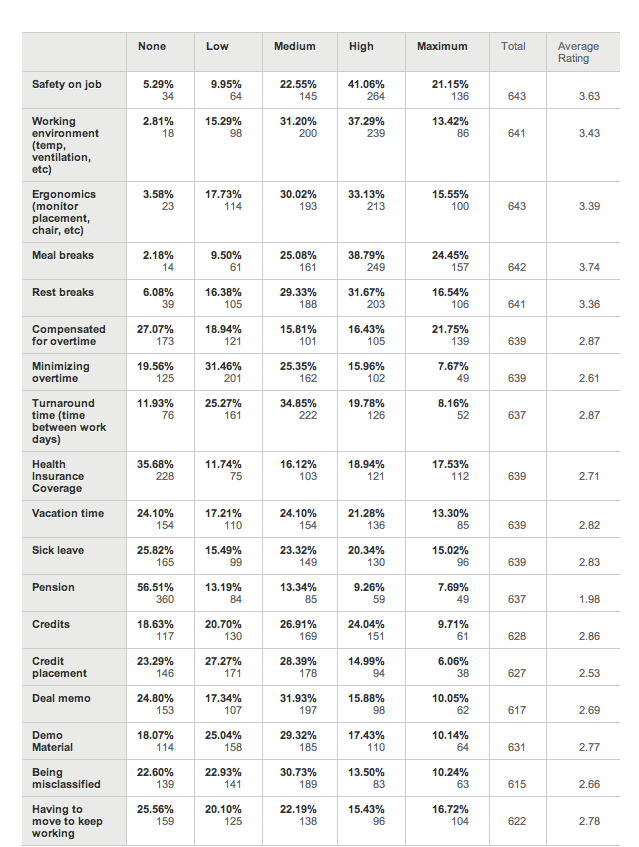 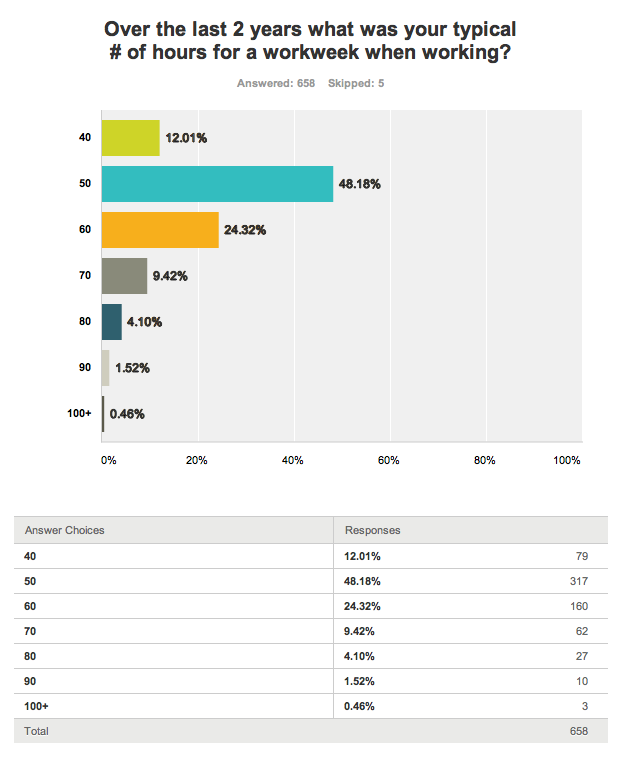 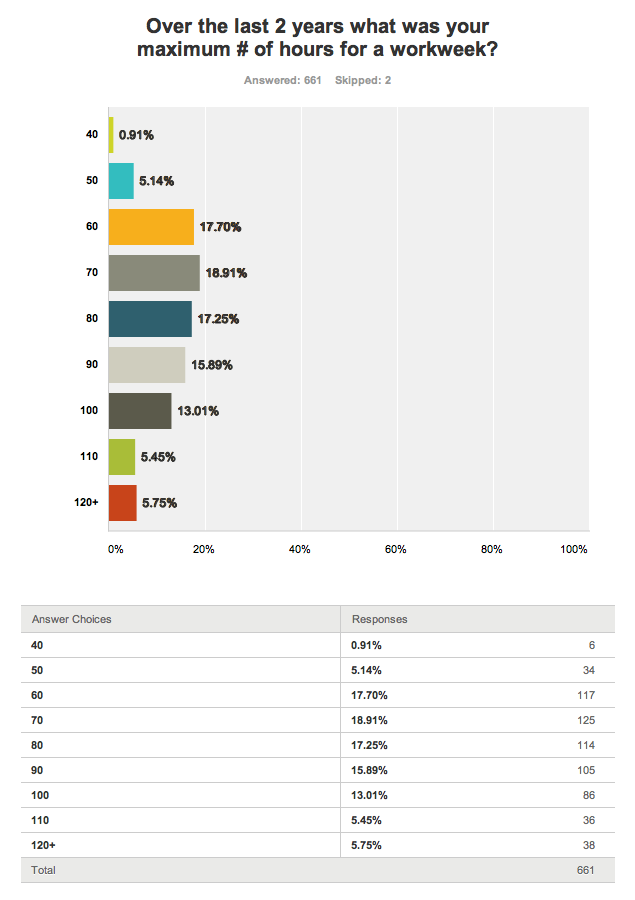 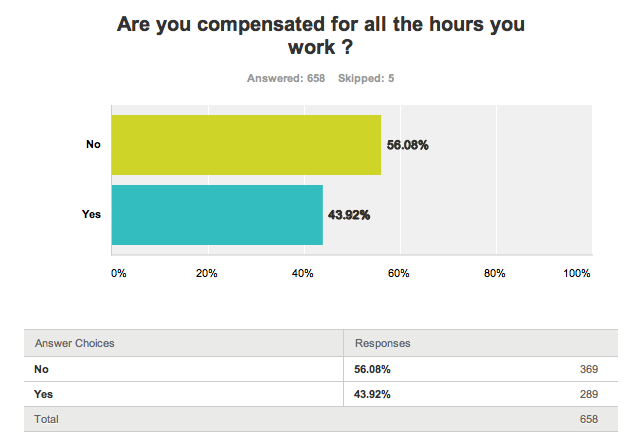 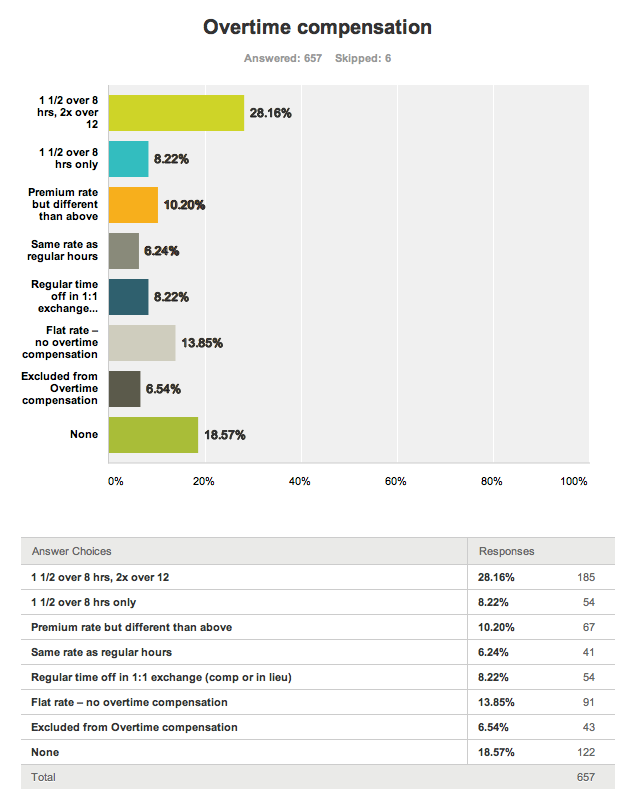 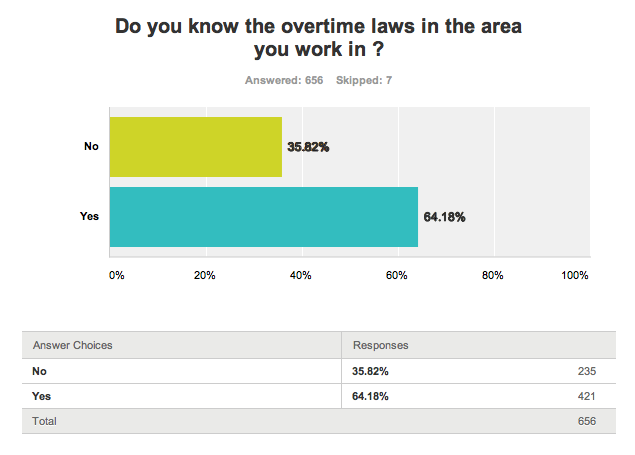 The following data was sorted in Excel and shows Median values in addition to Averages.

Priorities is the importance of what professionals placed on each issue.
Below is the global priority list sorted. 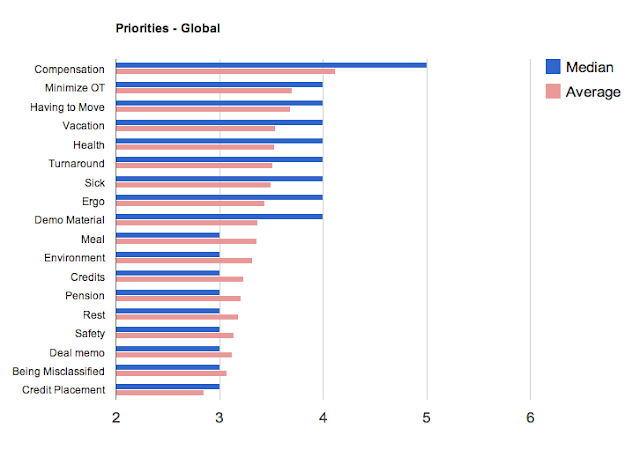 
Companies shows how well the companies are dealing with the specific issues from the worker's perspective.

Global includes all survey results, even if no location provided. All values in nearest %
Small sample sizes provide questionable results for many countries.

I've just completed organizing the numbers so haven't analyzed them in detail. I will do a follow up post with comments from those taking the survey. [Comments from the survey are now up ] There are certainly some differences between locations. Some of the attitudes about priorities are likely to be relative to the perspective at that particular location.

Compensation for OT, minimizing OT, and avoiding moving are the top in most countries.
Low on the list is credit placement. Doesn't mean it's not an issue but other more pressing matters.

And to be clear anything marked as compensation pertains to being paid for Overtime when it is worked. 'Compensation for all hours worked' is just what it says. This is not to imply higher wages but simply being paid for work done.

Almost 39% receive no OverTime compensation on a global average.
Almost 36% don't know the overtime laws in their location.
14.46% get regular pay(or comp time) instead of overtime pay.

Those who had to put in 24hrs or more in a continuous day were 2nd only to those who had put in 14hrs a day.


[Updated 6/18/2013 Added a couple more paragraphs because I want to make sure the numbers sink in and don't just appear as numbers on a chart.

In New Zealand 38% of the workers had worked 100hrs a week during their heavy crunch time.
Keep in mind a regular work week for most countries is 40 hours. At 100 hours that's 2-1/2 times the number of hours per week as a regular person has to put in. That's over 14 hrs a day even if you work 7 day weeks. Equivalent to 20 hrs day if it were a 5 day work week. Also keep in mind most countries and fair trade organizations have a cap of 60hrs a week total.  Anyone putting in 100hrs in a week has exceeded the limit in most countries by a full weeks worth of labor on top of the maximum.

Those who don't work in visual effects tend to have a hard time to grasp this concept. ]

The bottom line is visual effects professionals are putting in a lot of hours, frequently beyond limits set by both countries and some industries. And many of the hours are not compensated so a majority of these workers are being exploited unless their pay is correctly calculated to cover heavy overtime.

The death march: the problem of crunch time in game development

Summary
First, thank you to everyone who took the survey.

Hopefully this will shed some light on issues for visual effects workers around the world and help to show similarities and disparities between areas.

There have been other surveys done in the last year by VFX Solidarity, the UK VFX group and others. I'll try to post links to those here.

This information could at least be the start of research for both guilds and trade association. More surveys will be likely coming from a number of groups including the Visual Effects Society.

I'm still pushing for workers to come up with a Code of Conduct addressing these issues.
More info in these posts:
VFX Professionals United
Global VFX Workers

If you wish to have a voice in the future of visual effects you will have to speak up and make yourself heard. Participate in surveys, post comments, post you own blog, get involved with forums, etc.

And again, very little I've posted has been LA specific. See VFX World Wide PI talk which lists issues and solutions. With the exception of health care, ALL of the issues were world wide. Subsidies have a huge influence, good or bad, no matter where you work. We are not working locally for local markets. The visual effects industry is global with work being done around the world and with many professionals having to move around the world. Any change in any area will affect you.

Massive Overtime and unpaid work hours are problems all around the world. See the survey results.

The solutions included a global trade association and guilds among other things. For those who think guilds are LA centric, many guilds cover the entire US. Also note that most countries of the world have guilds and many have specific film related guilds, including Canada and the UK among others.  And yet there is an amazing amount of ignorance or denial regarding all of these things. See Visual Effects Guilds to learn more about guilds.

For those who wish to see improvements to this industry, have courage to stand up and be heard. It's in your hands. The time for finger pointing or waiting for someone else to solve all the problems is over.

If you have thoughts or insights based on the survey results please leave them in the comments below. If you have suggestions for future survey questions you think are important go ahead and leave those in the comments section as well.